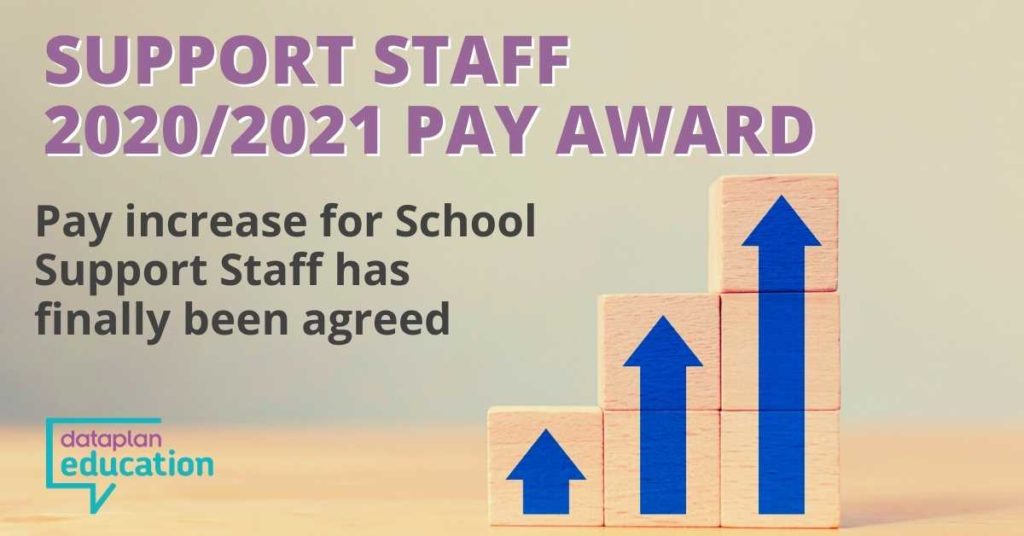 As we mentioned in our recent blog post ‘Teaching Staff 2020/2021 Pay Award’ increases to teacher’s pay were recently confirmed, whilst the decision on support staff was still under negotiation.

After much back and forth as is always the case in these situations this year’s pay award for Support Staff has finally been agreed.

After long deliberations, the Unions have managed to reach an agreement on this year’s pay award for Support Staff in Schools. All three Unions (Unite, UNISON & GMB) recently balloted their members with the following results:

With the above ballots in mind, the final decision to accept the deal by UNISON and GMB has now been accepted by UNITE as a collective majority meaning that Support Staff are finally able to move forward with a confirmed pay increase for next year.

The final figure that has been agreed is a 2.75% pay increase. In addition, a new annual leave minimum (with less than 5yrs service) of 22 days per annum has been agreed which will be an increase of 1 day on the current minimum of 21 days.

Mental Health has also been high on the agenda and the National Joint Council (NJC) has agreed that the joint secretaries will begin discussions on the causes of workplace stress and mental health, which if moved forward successfully could have a huge impact on School Support Staff.

The costs of metal health, including lost productivity at work in England alone is £105.2 billion a year.

Support Staff sickness due to issues such as stress, depression, anxiety and bipolar disorder is reported to have increased from 43,307 days to 58,300 by the last academic year (a huge 38% increase). It will be interesting to see what the proposed plans to address this are, and the impact that this has on sickness due to mental health.

As and when more information becomes available we will provide further updates.

The NJC are expected to start discussions shortly around how the Education sector can meet the challenge of the Government’s target for staff to be paid at least the National Living Wage. I think this is a good thing but as with all large scale changes with such a big impact it will take time over the coming years to negotiate and get in place.

Other posts by this author

You can find out more about which cookies we are using or switch them off in settings.

This website uses cookies so that we can provide you with the best user experience possible. Cookie information is stored in your browser and performs functions such as recognising you when you return to our website and helping our team to understand which sections of the website you find most interesting and useful.

Strictly Necessary Cookie should be enabled at all times so that we can save your preferences for cookie settings.

If you disable this cookie, we will not be able to save your preferences. This means that every time you visit this website you will need to enable or disable cookies again.

This website uses Google Analytics to collect anonymous information such as the number of visitors to the site, and the most popular pages.

Please enable Strictly Necessary Cookies first so that we can save your preferences!